Wakanda FOREVER!!! By now if you haven’t seen the movie, go see” THE BLACK PANTHER”! While most of us deep down inside rooted for T-Chala. I can say I identified more with Erik Kilmonger played, by Michael B. Jordan. Granted, the brother went about it totally wrong. He allowed himself to get bigger than himself! (Been there done that..) I can identify with being apart of a community but, not really feel accepted or even wanted! Through self-care and developing self-awareness. I was able to identify that some of those feelings were rooted in me accepting that I projected my reality, and I needed to become confident in my gifts.  In other words, I took a break from the foolishness and did some SELF WORK. But we can not ignore the fact that we as an African American community can be stubborn, unforgiving and very closed minded. It’s the underline clock-able but not react-able shade. When they go low I go high!  I can also relate to having good intentions and meaning well, despite having a totally screwed up one-sided view on a situation or allying with the wrong side of the action. You know those times when you just swear up and down you know what you are talking about? Having not a clue of the bigger picture. Wanting to be apart of something without pulling back and assessing with your higher self.  Often we “fight for integration into a house that we are not meant for”. Sometimes the fight is simply wanting to be included, seen as valuable, or that your gifts too can be used.  The solution, create your own lane! The doors may shut, but sometimes you have to just run down to Home Depot. Grab some supplies and make your own door. SUPRISE IM HERE Kilmonger couldn’t see the bigger picture, protecting Wakanda from the outside world. 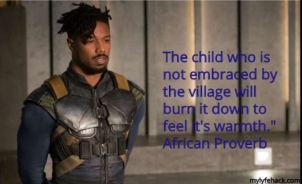 However, village he should have been accepted by did not claim him killed his father and disassociated themselves from him. Leaving him abandoned fending for himself. He ultimately allied with the wrong side. Sound Familiar? I know I fought for years to feel accepted in my culture accepted in my faith and in some ways my family. And we wonder why the churches are losing millennials! For one we have been lied to and a lot of us are finally opening our eyes. Coerced and tricked into accepting the religion of our kidnappers. After they plagiarized the original story (ours) and gave all the characters blond hair Greek and European names.(slight hint of shade)

They demonized our spirituality as satanic & Pagan. Don’t take my word for it, I encourage you to do your own research and come to your own conclusion. The African proverb “The child who is not embraced by the village will burn it down to feel its warmth”  is a classic example of what is going on within our black families. We thrived much better as villages that were aware that NOTHING IS WASTED! There was an order of operations and everyone was aware that their role worked for the betterment of the village as a whole! But now we have disposable families with cliquish relatives and a rug full dirt because that’s what we do. Sweep everything under the rug, we pack our plate and we leave.

I LOVE MY PEOPLE THOUGH!!!!